This shoot was incredible! Probably one of my most favorite film productions to contribute to. The styling, hair and make-up, the colors and overall production (it was shot on film!) A million dollar set-design was custom built on a soundstage for this campaign.

The DP/camera tracked my walking shots on a dolly. I had to time my walk to match the tracking for the camera. It was like a dance between myself and the lens. We rehearsed several times for tracking and movement and then straight into a take. Later filming switched to cherry picker type rig for the overhead shots. My castmate (a professional rock climber) later abseiled from the rafters to get the light twist action.

The client was on set situated behind blackout and monitors, surrounded by about 40 people namely, production and the advertising agency. They put in an odd request to key hair to cut a strand of hair hanging in front of my face. The stylist soon approached me with scissor blades flared for action. In those instances on-set you just have to accommodate to keep everyone happy and production on track (every minute costs $1000s). Throwing a tantrum won’t serve you or your career well.

Such an amazing effort talent, crew, and a visionary “actors” Director made the whole process seamless. 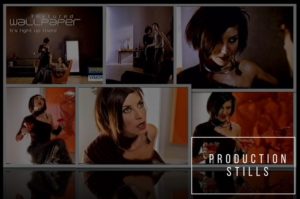